If You’re Silly and You Know It

A Big Guy Took My Ball by Mo Willems

I am a Humpback Whale by Aaron Carr

I’m the Biggest Thing in the Ocean by Kevin Sherry 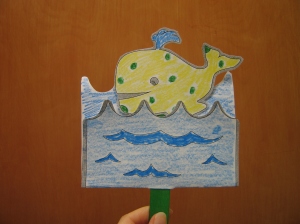 I found a bunch of alternate book options that would have worked perfectly in this story time. All of my final choices were short and sweet because our groups have skewed on the younger side. That being said, while I love I’m the Biggest Thing in the Ocean it’s always a total hit or miss with the groups I read it in. Sometimes they get it and love it, other times they stare at me blankly. Does anyone else have this experience? I really liked this craft–I printed it out on card stock so it would be sturdy. The kids enjoyed being able to fold and push the craft stick through the pre-made holes in the card stock. They all swam their whales to their grown-ups after the program–how cute!

If You’re Silly and You Know It (action song)

Theme discussion and the Three Things to Remember

Up, Down, and Around by Katherine Ayers

My Garden by Kevin Henkes 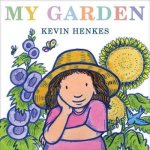 (To the tune of Row, Row, Row Your Boat”) Shh, shh quiet now, let’s all gather near/ it’s time to stop and listen up, our last story is here

Cupcake Liner Flower Craft (cute, cute, cute!) Well, my example isn’t the cutest but the kids came up with some really adorable designs. Courtesy of Storytime Katie (hers is very cute!) 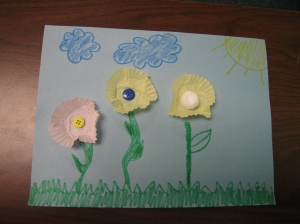 I felt like this was a super smooth program for the most part. Since My Garden introduces the concept of using your imagination to grow crazy things, the placement of the Planting the Garden Flannelboard Activity behind it worked well since in our flannelboard garden we had A LOT of silly things like dogs, cats, and ice cream sundaes! After we got everything up on the board we talked about what things we could really plant and also if we could plant absolutely anything what that would be. The kids really enjoyed putting their piece on the board and everyone was surprisingly patient as we worked our way around the room. I will definitely be trying something like this again!

Our fiingers on our knees go tap, tap, tap/ here comes a book so we clap, clap, clap

Be Quiet, Mike! by Leslie Patricelli

Listening Game: Ask kids to close their eyes while you make noises using different objects. The children must guess what is making the sound. (The children will peek! I’ve learned to turn my back or make them put their heads down, too, as to make it harder to see. But ultimately you just have to roll with it. 😉 )

Seals on the Bus by Lenny Hort

Miss Jenny is a part-time employee of the library who is going to school for music therapy (awesome, right?!). She had offered to play her guitar in story time but I had never taken her up on the offer. At the last minute I realized this program would be the perfect opportunity so she went home, grabbed her guitar, and rocked it for the kids. She played several songs while the kids sang or danced along then we handed out the rhythm sticks and she led some activities. It was a whole lot of fun! Thanks Miss Jenny!

Scarf Dance: Ask everyone to take a scarf and place it on their head. Start the music and begin dancing. The challenge is to not let the scarf fall. If it does, allow kids to catch it and put it back on their heads then resume dancing.

I can make my hands go (action rhyme)

Who Sank the Boat? by Pamela Allen

Sink or Float Activity: Collect items you want to test out–plastic toy, crayon, battery, spoon, rock, etc. Fill a large container with water and place it in the front of the room. Pick up an item and ask the group if they think it will sink or float then place the object in the water. Repeat this for all the objects having discussions about why they think each item floated or sank and what was the same about the objects that floated/sank.

A is for Alligator (sit down rhyme)

The Napping House by Audrey Wood

This summer’s theme was science so this was one of my attempts at getting sciency. The program as a whole was okay but I wasn’t thrilled with certain elements. One of those elements was the scarf dance. I thought it would be super cute but honestly the kids couldn’t get into dancing at all because they were concentrating so much on not letting the scarf fall. Most of the kids ended up standing there watching me dance around them like a crazy woman. I also had kind of a hard time finding books that related the concept of gravity in a fun and not technical way which was a little frustrating. Lastly, the balancing girl is neat but not too exciting as a craft. The kids weren’t too thrilled with coloring it but they did get into putting the paper clips on her arms to make her balance. On the positive side, the Sink or Float Activity was really fun. I did the activity from the front of the room–if you have smaller groups you could easily let the kids come up to put the object in the water but our groups are too big so I just put them in. I tried to make it exciting by asking the kids for drum rolls and things and they really did get into it. One of my groups even legit cheered when objects floated!

I really, really, really wanted to build a robot in my upper elementary age group but I was very intimidated at the same time. I researched some easy to make robots and came up with the Art Bot.

I used a couple different websites for inspiration and instructions: Wired and Science Buddies were the main two.

My Method
1. Before the program I hot glued a popsicle stick to a styrofoam ball. I then hot glued the styrofoam ball to the top of the motor being extremely careful to not get glue on the inside of the shaft.

2. (From here on out I walked the kids through the steps during the program.) Using double sided foam tape, other tape, and whatever filler materials you need attach the motor to the top of the plasic cup. (This part was a little tricky for the kids since our motor was not flat on the bottom. But with a little finesse and ingenuity all the kids eventually got it.)

4. Using tape, attach three markers to the sides of the cups leaving the caps in place. The markers need to be evenly spaced so that the cup is stable when standing.

5. Decorate the robot in whatever style you want.

6. Put a piece of paper underneath the robot and take off the caps to the markers. Place a wire underneath the rubber band on the + side then repeat with the other wire on the – side.

7. The robot should begin moving and drawing a picture!

8. If the robot didn’t work I encouraged the kids to figure out why and be inventive about trying to fix it. We had some add popsicle sticks to the top in a propeller shape; others added some to the bottom to stabilize the robot.

The kids had an absolute blast! It was one of those programs I was so proud to have planned and led. There were moments of frustration but everyone did really well in moving past the problems. At the end of the program we asked the grown-ups in to show them our creations then everyone took their Art Bot home.

My fingers on my knees go tap, tap, tap/ here comes a book so we clap, clap, clap

The Animal Boogie by Debbie Harter

Shake it up, Baby by Karen Katz

From Head to Toe by Eric Carle

As you may guess this was a very fun program and perfect for this age. The pacing of the program went well since it starts with a little less action but moves into lots of moving and grooving. I shortened the Animal Boogie by only reading the first two lines of each page. It’s a very cute book and for those of you who play an instrument there is sheet music for the song in the back of the book. Shake it up, Baby actually has a rattle right in it and pairs other actions with shaking the rattle or maraca in our case. It worked beautifully!

2. Flashlights and Rainbows Experiment: Using flashlights and old CD’s the kids experimented with all the ways they could create rainbows.

The kids had a lot of fun during this program! Their favorite book was Press Here and their favorite experiment was the Rainbow Milk Experiment. I split everyone into 3 groups and rotated them through the stations. It worked well since everyone cooperated and really got into the experiments.